Born from a collaboration between Tandy and Motorola in the mid-70s, now Tandy also enters the consumer computer market and after the first versions called TRS-80 and developed by a teletext project, now this computer can generate colors.
Initially the name was to be a successor to the TRS-80 and then it was decided for TRS-90 to differentiate it from the predecessor that used a Zolog 80, but later it was changed leaving the name TRS-80 adding the word color to make it clear that it was of a color computer.

In the computer we find an expansion port, a cassette port, a serial port and two joystick ports. The video output is only in RF, there is no possibility of having a composite signal as well. If you have the PAL version you can find the composite signal at the input of the RF module, I insert it here the guide for editing. If you have the American NTSC version it is not possible to obtain the composite signal so easily, the modulator must be removed and a card inserted in its place to generate this signal, this is the card to be inserted on the NTSC version.
The cost of the processor was high if we compare it to the competition that used the 6502 so to be able to keep costs down it was saved on other components, one of these is the audio chip which is single channel. 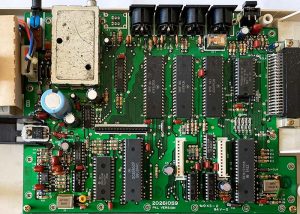 Let's see how to get the composite signal out of the PAL version Tandy Color Computer 2.

Read everything "
Language
We use cookies strictly necessary to ensure an optimal experience in browsing the site. By clicking on "Accept all", you allow us to use all cookies. You can always review your consent by clicking on Cookie settings.
We use cookies on our website to give you the most relevant experience by remembering your preferences and repeat visits. By clicking “Accept All”, you consent to the use of ALL the cookies. However, you may visit "Cookie Settings" to provide a controlled consent.
Cookie SettingsAccept All - Accept All
Manage consent